CPM vs CPC vs CPA: How to Sell Display Ads

Selling ads directly is not for everyone. If you've got a smaller audience and not a lot of time to spare, it's more efficient to join an ad network. Click the button below to see what the best ad network for your needs is.

Publishers looking to start selling display ads directly will be forced to make a number of decisions in their attempt to monetize this traffic. If you’re fortunate enough to gain traction and start getting some RFPs from potential advertisers, you’ll likely need to decide which pricing methodology you’ll use to sell your display ads. If you don’t have anywhere to put ads yet, click here and start your blog today.

Because digital display ads can be tracked and analyzed in ways that don’t apply to more traditional advertising media, they can also be priced in different ways. Advertisers are able to track when their ads are clicked and what actions are completed once an ad is clicked, opening up the options for compensating publishers based on different criteria. (By the way, if you’re enjoying this article, you may want to subscribe to our free newsletter; we’ll send monetization tips straight to your inbox each day.)

There are three primary ways to price display advertising:

This post will take a look at the specifics of these options, including the pros and cons of each.

Under a CPM arrangement, the advertiser agrees to pay the publisher a predetermined amount for every 1,000 ad impressions served. This effectively means that the publisher is compensated for every ad shown.

Here are a few things to know about CPM pricing arrangements:

For example, an advertiser may agree to run a campaign on a site under the following terms:

CPM rates can range from less than a dollar to three figures, meaning that showing 1,000 ads can generate a few cents in earnings or more than $100. That range is so wide because the compositions of audiences from site to site varies so dramatically. Sites that can offer access to targeted, valuable Web traffic can command higher CPMs, while those catering to a broad, relatively unattractive audience will be able to command much less.

Here’s a page from the PopSci.com media kit, showing off the impressively high CPMs that site commands: 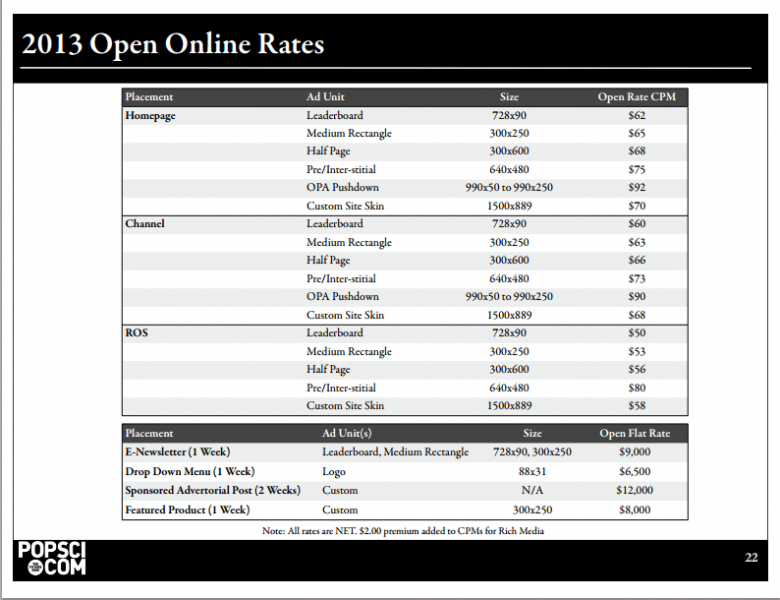 Advantages: The most obvious advantage with a CPM agreement is that you make money for every display ad you serve, regardless of whether or not it generates a click, lead, or other action. Every visitor who comes to your site makes you money, plain and simple. This results in a relatively stable stream of earnings; if you can predict your traffic, you can predict your revenue.

The ability to maintain control and visibility is also an advantage here; you know exactly how many ads you serve, and therefore exactly how much you’re owed from your clients.

Disadvantages: From a publisher’s perspective, there aren’t many disadvantages to a CPM pricing model for display ads. But in exchange for the stability achieved, you do risk leaving some money on the table if your site has an audience that performs well from an advertiser perspective. In other words, CPM arrangements don’t always lead to the highest earnings; if your site has an audience that is a good fit for an advertiser’s message, you may be able to generate more by being compensated for each click or each action.

Here are a few things to know about CPC:

Publishers are suppliers of pageviews, so they should always measure their total revenue relative to pageviews (i.e., revenue per 1,000 pageviews) even if they sell ads on a CPC basis.

For example, let’s assume that the same publisher and advertiser from our example above enter into a CPC agreement where the advertiser pays $5 for each click / visitor sent. The publisher runs the ads as follows:

Advantages: If you have an audience that is a good fit for a certain type of ad–meaning that the message is likely to appeal to your visitors and they in turn are likely to click on it–CPC campaigns can be great ways to monetize. Just because they are low risk for advertisers (who pay only for the ads that work) doesn’t mean that they can’t be big earners for publishers as well.

You’ll also find that a willingness to participate in CPC campaigns will significantly expand the universe of potential advertisers. Because many companies only want to pay for clicks (and not just eyeballs), there is no shortage of advertisers looking to run CPC campaigns.

Disadvantages: There is a pretty big risk to running CPC campaigns: if the ads aren’t resonating with your audience, you can end up with zero compensation for serving a large number of ads. In other words, you risk giving away a large number of ad impressions for nothing, and making the lion’s share of your revenue from the few ads on which your visitors click.

There’s another pricing model that requires even more steps to be completed in order for the publisher to be compensated. Under a cost per action (CPA) campaign, the advertiser pays only for clicks that subsequently see visitors complete some specific action. This action can be a purchase of a product, download of a document, sign-up for a newsletter / membership, or countless other steps.

This form of advertising is essentially affiliate marketing, an arrangement where the publisher is compensated for each sale (or another non-monetary transaction) they’re able to generate for the advertiser. This is obviously low risk for the advertiser since they pay only for transactions that generate their desired outcome.

Here are a few things to know about CPA campaigns:

Again, the opportunity exists here if you have an audience that is a great fit for a specific advertiser campaign. If you’re trying to convince visitors to your big game hunting blog to sign up for a free sample of lipstick, you’ll probably see a terrible conversion rate. But if you’re presenting that same audience with an opportunity to buy hunting apparel, you might be in business.

Disadvantages: The biggest disadvantage to this arrangement is the increased volatility in earnings. It’s possible that days could go by without a single conversion, even if you’re serving lots of ads and generating lots of clicks.

Another big downside is that the loss in transparency. Once a visitor leaves the publisher’s site and enters the advertiser’s, it’s impossible to know if they convert or leave immediately. The advertiser will of course track this carefully, but this means that the publisher has to take the word of their partner to report honestly on revenue earned.

Most CPA advertisers are ethical and honest in their reporting to partners. But in some niches there are less than reputable characters, and dishonest reporting can be fairly common.

There’s no hard and fast rule about which pricing methodology is the best; it depends on the site, audience, and campaign. Publishers generally prefer CPM arrangements since that yields the most predictable cash flow, but that approach won’t necessarily produce the best results (i.e., most revenue) in all situations.

Consider the following hypothetical ad campaign running on your site:

The revenue generated and the optimal pricing strategy from the publisher’s perspective depends on how much revenue is associated with each deliverable. For example:

Obviously, the revenue generated is very sensitive to the compensation figure associated with each arrangement. In this particular example, the publisher can offer an audience that converts at a relatively high rate–and therefore would make the most money with a CPA arrangement.

There are advantages and disadvantages to each type of pricing model for publishers monetizing their Web traffic through display advertising. The methodology that makes sense for one site might not be optimal for another. If you’re trying to break into the display advertising game, try experimenting with different types of campaigns to see how your audience responds (and monetizes) to different structures.