Wikipedia Revenue Analysis: How a Wiki Could Make $2.3B a Year

Wikipedia is one of the largest websites in the world, attracting hundreds of millions of unique visitors each month and adding hundreds of articles daily. It’s also known for being a non-profit organization; the founders of the Wikimedia project made an explicit decision to make all content free to access and free of advertisements, funding operations instead through donations from appreciative users.

So just how much revenue is Wikipedia passing up on a monthly basis? Quite a bit it turns out; below we offer our monetization makeover for one of the world’s most popular websites, outlining how the property could be earning hundreds of millions of dollars every month, amounting to roughly $2.3 billion annually.

Our assumptions on traffic are based on the stats that the ultra-transparent Wikipedia makes publicly available; for August 2016, all Wikimedia projects generated about 16 billion pageviews worldwide.

The biggest opportunity for Wikipedia is to place some banner ads throughout the site. Currently, there are no ads at all on Wikipedia; we’d suggest starting with three standard ad units: 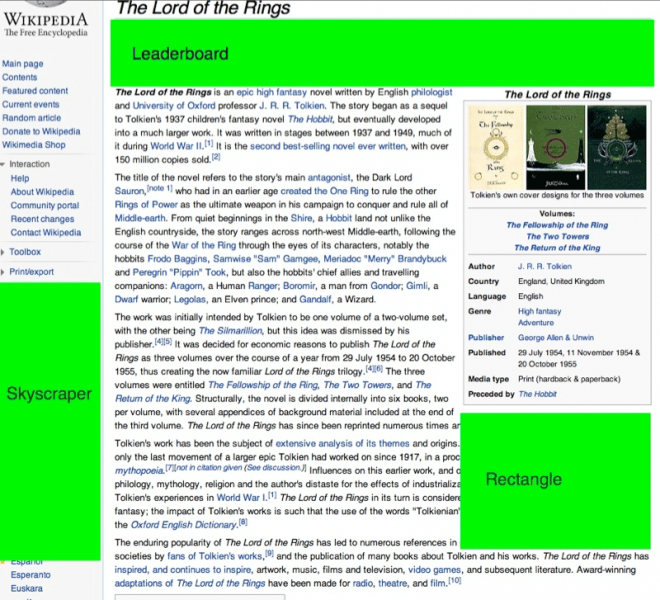 This prevents the site from becoming too cluttered by ads (which would erode the user experience) while still giving the site plenty of opportunities to generate revenue.

If we use that $2.66 figure for each of Wikipedia’s proposed ad units (leader board, skyscraper, etc.), we get to a bit over $10 per every thousand impressions ($2.66 x 4 ad units per page = $10.64). In reality, certain ad units would generate much higher CPMs than others (we expect the 300 x 250 medium rectangle ad space to be the top earner–perhaps closer to $4 per thousand impressions–and the link units to earn less than $1. But overall those rates seem about right for Wikipedia’s traffic, which is roughly in line with the Internet average.

Another monetization opportunity comes in the form of affiliate links on article pages. Essentially, Wikipedia could begin directing visitors to relevant third-party merchant sites from their article pages. When these visitors become paying customers, Wikipedia would get an affiliate payment–a referral fee of sorts. Perhaps the easiest way to get the affiliate marketing revenue stream flowing is to partner with a well known merchant such as Amazon. We suggest eventually setting up multiple affiliate relationships in order to maximize conversions, but Amazon is a good place to start.

We’ll assume that about 10% of the approximately 16 billion monthly pageviews on Wikipedia should have affiliate links, and that those affiliate links will see a click rates of about 0.25%. That translates into about 4 million affiliate clicks each month. Assuming a conversion rate of about 15% and average purchase of about $50, Wikipedia could generate almost $30 million in monthly Amazon sales.

At an 8.5% commission, Wikipedia could earn about $2,55 million monthly from an affiliate relationship with Amazon. That conservative estimate could get pushed higher with the addition of affiliate links to more pages (we’re assuming only 10% of pages would have them) and more targeted affiliate relationships.

Many pages on Wikipedia would be good fits for lead generation forms, allowing the site to collect contact information for visitors and sell it to vendors who might be able to sell them a relevant product or service. For example, Wikipedia’s page on car insurance could feature a widget that prompts visitors to enter their email and ZIP code for deals to see insurance rates. Wikipedia can then sell this information to insurance companies, who could then email plan information to that visitor. 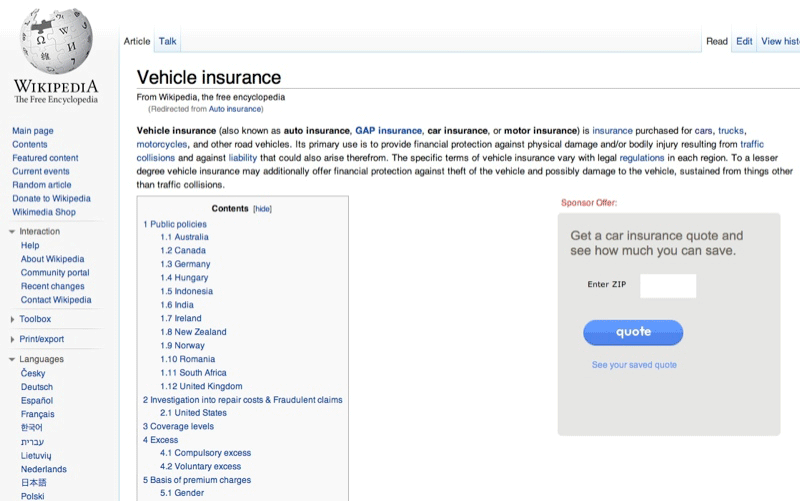 Below is a rough estimate of earnings potential for a handful of insurance-related Wikipedia pages in August 2016:

Wikipedia is currently missing out on an opportunity to build a massive database of email addresses that can become a regular revenue stream. With a few minor tweaks, Wikipedia could capture millions of email addresses and earn substantial revenue from them each month. We suggest creating a free e-newsletter to which visitors could subscribe–we’ll call this the Daily Wiki. There’s no need to create additional content; this email could simply highlight a particularly interesting or timely Wikipedia page (basically, what’s already being done on the home page). 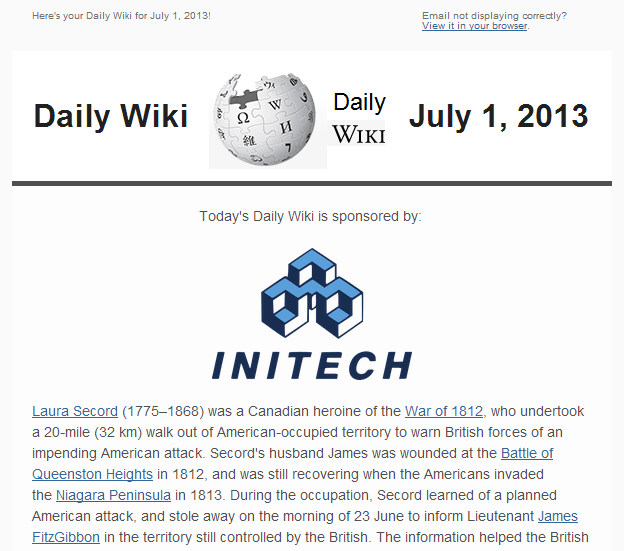 While this newsletter subscription would be completely free, Wikipedia could monetize it in two ways:

This newsletter could be promoted via a subscription box in the left sidebar (see the top of this page for an example) as well as links within content. We’d also suggest experimenting with a pop-up that presents visitors with a chance to sign up for the daily newsletter.

By positioning the newsletter prominently to Wikipedia’s more than 500 million monthly visitors, we estimate that the newsletter would capture 1% of those visitors, or five million names, within three months.

We’ll assume that 10% of those, or 500,000, opt in to third-party mailings. It would be reasonable for Wikipedia to rent out each name on that list a total of once a month at a CPM of $20. That translates into $10,000 in monthly revenue from third-party emails. This figure could be multiplied if multiple mailings were sent to each address. Weekly mailings, which would generate upwards of $40,000, would not be unreasonable.

Meanwhile, sponsorship of the Daily Wiki (which goes out to the full list of five million) should fetch $25,000 for each send. If Wikipedia is able to sell even half of its available inventory, it could generate $375,000 each month.

Between sponsored third-party mailings and sponsorship of its daily newsletter, Wikipedia could generate $385,000 in monthly revenue from email.

Given the tremendous recognition of the Wikipedia brand, we suggest the opening of an online store where visitors would be able to purchase branded Wikipedia merchandise. We’re thinking coffee mugs, polo shirts, pens, etc.–the standard fare for an e-store. After all, who wouldn’t want to sport a cool Wikipedia polo? 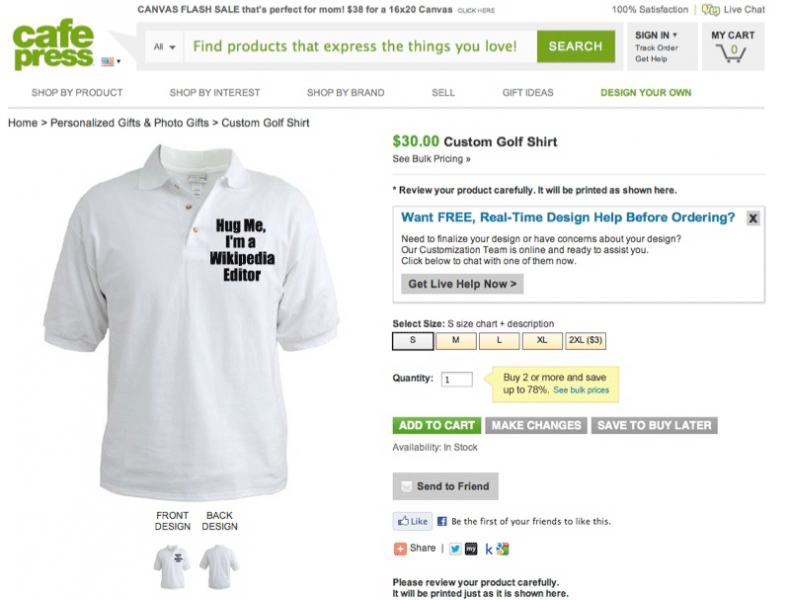 Estimating revenue that could be generated from an online store is a bit tricky, but we can apply a few rules of thumb to come up with a rough estimate. Let’s assume that 1% of the 500 million monthly visitors end up at the Wikipedia Store, a conservative estimate if a link was positioned prominently (such as in the nav bar).

E-commerce sites have an average conversion rate in the neighborhood of 3.5%, which would translate into 175,000 paying customers for Wikipedia. If we use an average ticket price of $25, Wikipedia could be generating $4,375,000 in monthly sales at its online store.

Currently all visitors to Wikipedia share the same experience: free access to unlimited articles. The creation of a premium membership to Wikipedia could generate another recurring revenue stream. Charging for access to Wikipedia articles would likely result in significant erosion of the goodwill built up by Wikipedia (not to mention the audience), so we don’t see that route to be a viable option for a premium package. However, there are still plenty of options for creating a valuable membership package for which users would be willing to pay. In other words, the current site would remain completely free but additional features would be added pas part of a premium package.

We suggest that the “Wikipedia Premium” include some combination of:

I’d personally be happy to fork over $10 a month for that package, and I’m guessing many more Wikipedia users would be in the same boat. 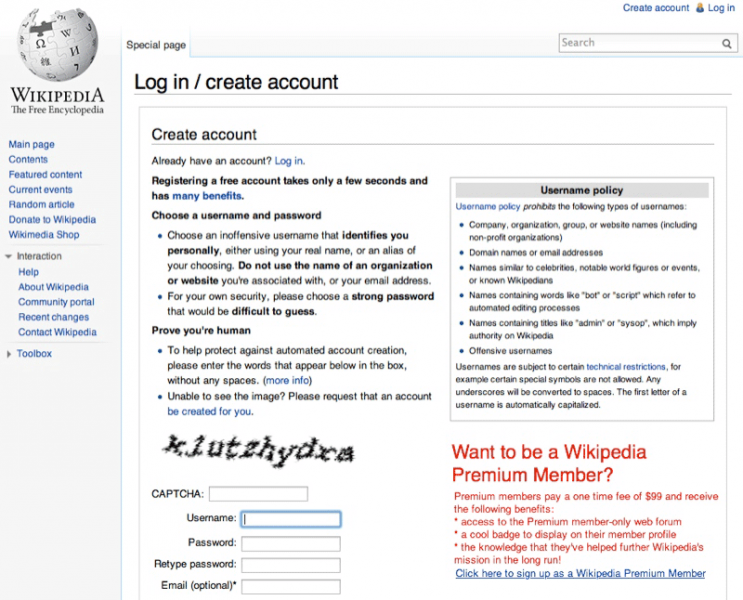 A detailed subscription revenue model would start from a base of zero and factor in monthly attrition and conversion rates. For simplicity’s sake, we’ll assume that within six months Wikipedia could get 0.5% of the 500 million people who visit the site monthly to sign up for the premium product (that’s about 2.5 million people). If priced at $10 per month–a price point we think could generate the aforementioned conversion levels–Wikipedia could be generating $25 million in premium subscription revenue each month.

If Wikipedia were to implement the monetization techniques highlighted above, we estimate the site could be generating monthly revenue of $239,594,325.

To put that in perspective: