How to Make a Spec Sheet

When attempting to monetize a website through direct display advertising, there are a handful of documents that need to be assembled to make the sales process flow smoothly. In addition to a thoughtful media kit, it helps to have a rate card and a spec sheet assembled as well. That last document can be a bit challenging to put together, especially for those who aren’t familiar with the technical aspects of online advertising. This guide should hopefully help you create a proper spec sheet to facilitate the sales process.

(Be sure to sign up to get the free MonetizePros newsletter for even more ad sales tips and tricks.)

What Is A Spec Sheet?

A spec sheet should provide an advertiser with all the technical details of the advertising options on your site. It should convey what can and cannot be accepted from your ad partners, so that they deliver to you ads that can easily be installed and activated on your site.

Without a complete and accurate spec sheet, the process of delivering and starting campaigns often becomes chaotic. That can translate into lost revenue if ads aren’t running as they should, so creating a proper spec sheet is part of optimizing any online property that monetizes through display advertising.

Putting together a spec sheet is challenging for many publishers because this document includes a number of technical details that often aren’t in the display advertising vocabulary. If you’re struggling to build out a spec sheet for your website, this step-by-step guide should make the process easier. Below is a list of the fields that a basic spec sheet should include, along with a description of each and a “default” value you can put in when building yours:

There’s really no standard way to describe the location of an ad; as long as the position on the page is clear, you’re set here. Some examples of how to phrase this part of the spec sheet can include:

This part of the spec sheet is pretty basic; you’ll need to indicate the size of your ad units. This is usually expressed in pixels using a “length x width” format. For some more unique ad options, you might use “Custom” to indicate that further discussion around the size and style of the unit is needed.

If your site allows ad units to expand beyond the traditional dimensions, you’ll need to provide specifics. Below is an example of an expandable ad unit; what is originally a 924×50 banned can grow “taller” when the expansion button is clicked. In other words, it expands from this: 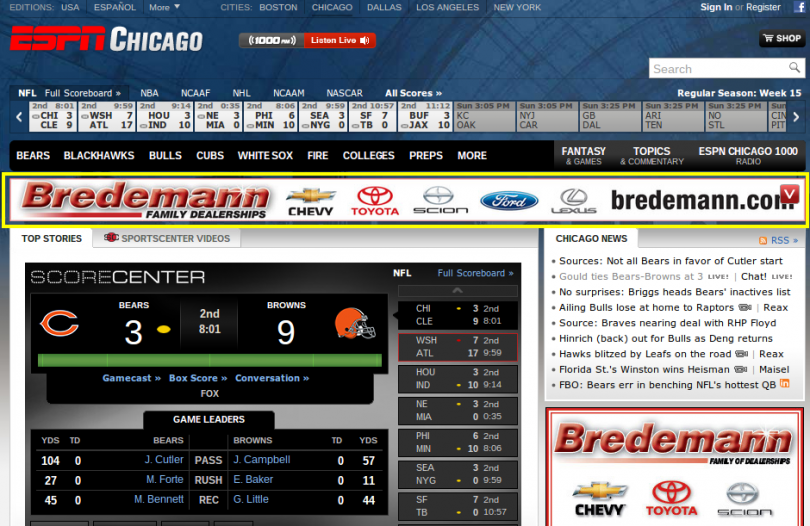 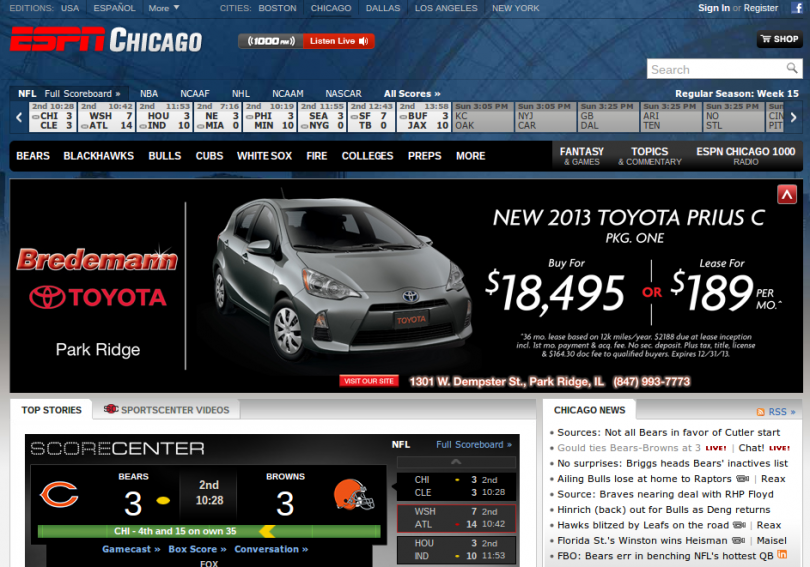 This field should indicate both the expanded size and the direction of expansion. For example, the above 924×50 ad unit would note, “Expands down to 924×250.”

Default Settings: If you are able to host expanding ads, we’d suggest indicating the following dimensions for standard ad units:

If expansion is not an option for an ad unit, simply note “n/a” in this field.

This field should be pretty straightforward: it describes how big the file the advertiser provides is allowed to be. Because larger files take longer to load, you’ll want to avoid trying to serve up huge files that can slow down the site. This is undesirable to both the publisher and the advertiser, as the overall user experience and the visibility of the ad both decline.

Default: For the most common banner ads, a maximum file size of 40 KB is standard. Most ad servers and sites can handle ads that are considerably larger than this; so you should have the ability to be flexible if an advertiser requests it.

A spec sheet should indicate what types of files (e.g., GIFs, JPEGs, etc.) can be accepted as an ad. Most advertisers build their creative files as either Flash (abbreviated as SWF, for “Shockwave Flash”) or JPEGs, so you’ll want to indicate if you can take these types of images.

Default: For most ads, this line item can note that JPEG, GIF, PNG, and SWF formats are acceptable. If you aren’t able to load any of these file types, take it out of the list.

This indicates whether advertisers can provide ad “tags” from a third party, or if you need them to send you the file and click URL for each placement. For standard ad units and most ad servers (such as DoubleClick for Publishers, or DFP), this field will be filled in with “Yes.” Most advertisers will prefer to send you third party ad tags, which comprises code that can be entered into your ad serving software to render their creative. This also makes your life easier, so you’ll generally want to have “Yes” in this column wherever possible.

If you need to have possession of the image or Flash file, then you’ll want to indicate it here. This may be the case if you’ll be displaying ads in non-traditional places (such as emails).

This indicates if an ad unit is allowed to be animated, or include moving graphics. In addition to Flash files, GIFs can feature animation as well (whereas JPEGs and PNGs are static images).

Default: This should be either a “Yes” or “No” field. In most cases animation should be accepted; so you will want to have “Yes” here for the majority of your ad units.

If an ad is allowed to be a Flash file, you’ll want to specify if there are any limitations. For example, some ad serving programs can only deal with files made in version 10.0 of Flash or lower (i.e., an older version).

Default: If you use DFP to serve ads, you should indicate “Flash Version 10.1 or lower” on your spec sheet.

Rich media refers to more complex ads that allow for a higher level of user engagement than traditional Flash ads. This may mean multiple levels of the ad (i.e., it responds to user clicks without simply re-directing to a landing page), video within the ad, or expandable dimensions. Some advertisers like rich media because it fosters higher levels of engagement and allows for more complex messaging.

Once the ad completes (i.e., the animation runs and the call-to-action appears), some advertisers prefer to have it loop (start over and run again). This field can specify how many times ads are allowed to loop.

Default: 3 loops. If an ad has 30 seconds of animation and 3 loops are allowed, the animation could run for 90 seconds before it would have to become a static image.

Some ads may incorporate audio; it’s up to you whether or not to allow these types of ads. The downside is a potentially poor user experience; unexpected sound can irritate visitors and cause them to navigate immediately away from your site.

Default: Allowed on user click. (I.e., an ad can’t automatically start playing sound, but can present a feature that allows visitors to turn on the audio if they’re interested in hearing it.)

Other options include a simple “Allowed” or “Not Allowed.”

This refers to a specification for video ads. (You may have also seen it referring to cameras used to produce Hollywood movies.)

Default: If you have any video ad units, a standard specification would be 20 frames per second.

The fields above cover the basics of a spec sheet, though other fields may be included by certain publishers. If you’re still confused about any of them, check out a few real-life examples:

Here’s another example of how a spec sheet might look, using the fields we highlighted above.

Creating a spec sheet is an intimidating task, as it involves learning a number of new terms and diving into the technical weeds of the online advertising world. But it’s an extremely important exercise, as it will position you to efficiently execute ad campaigns and avoid any lost revenue.