Why You Probably Won’t Get Rich & Famous on YouTube

Although getting rich and famous isn't as easy as it sounds, there's plenty of opportunities to make some serious cash on YouTube. Click the button below to check out the best online course on making money on Youtube.

Disclosure: This post may contain affiliate links, which means that I may receive a small commission (at no cost to you) if you make a purchase using these links. However, opinions are 100% my own 🙂

For most of us, YouTube is a great way to share videos with family and friends or to kill a few minutes during the day with some free video entertainment. For many, however, YouTube is a full-time job. Billions of dollars are spent each year on video ads that run in YouTube videos, allowing the makers of popular videos to generate passive income streams from their contributions to the site. Earlier this week, we profiled 25 celebrities who got rich and famous on YouTube.

Making a few dollars of revenue on YouTube is easy enough; it can be done with a basic webcam and a few hours of spare time.

Generating a meaningful revenue stream from YouTube is much more challenging, and a feat that only a very small percentage of YouTubers ever accomplish. In order to make real money from YouTube, you’ll have a few major challenges to overcome. Below we’ll highlight while many YouTubers fizzle out after only a bit of revenue and a handful of videos.

Unfortunately, you’re not the only person out there who’s had the idea of starting up a YouTube channel as a way to make some additional money.

Here are some of the more impressive stats about the market for online video:

We’re at the point where there is nearly an hour of YouTube video watched for each person on earth. That’s a massive amount of time spent watching videos on a monthly basis. But it’s spread out over a massive number of videos, meaning that there is intense competition for those viewing hours.

Reason #2: Most Videos Get Little to No Attention

The list of unlikely viral hits from unknown creators goes on and on. This gives potential YouTubers some big expectations; if they can do it, why can’t I?

The list of videos that have received almost no traffic, however, is much, much longer. YouTube is designed to highlight popular and trending videos, so many users only ever come across the best or most viewed pieces of content. But underneath the cream of the crop is a glut of old videos that have been viewed maybe 100 times. For every success story, there are dozens of “misses” like these.

Getting detailed data on the performance of the average YouTube video is tough, in part because of the massive size of the video library. A few years back, it was revealed that half of YouTube videos get fewer than 500 pageviews, and that only 0.33% of videos crack the 1 million view mark. These numbers have likely changed since then, but the general “top heaviness” of the video market remains. 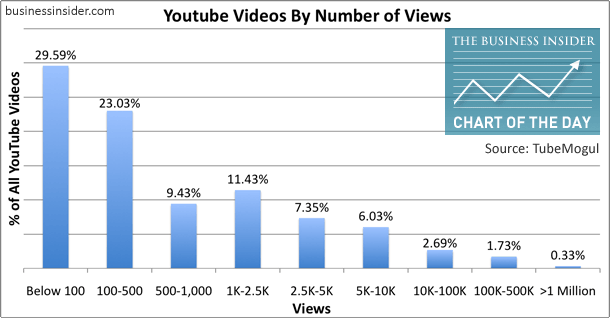 Again, the chart above is several years old. The number of YouTube viewers and the number of videos have skyrocketed since then. But it’s very likely that the general pattern still holds: a small number of videos generate the majority of views, while most videos are only ever seen a handful of times.

YouTube has a massive amount of content, and the quantity of content is growing rapidly. According to official YouTube stats, more than 4.3 million hours of video are uploaded each month, meaning that the number of videos competing for views is constantly growing.

So far, the response has been underwhelming. There are only about 100 paid channels up and running, representing an insignificant amount of total YouTube content: 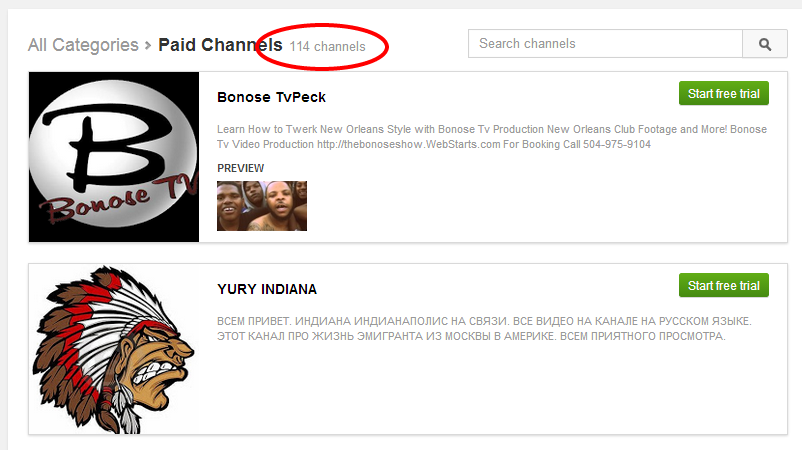 A lot of the premium channels have elected to keep the number of views their videos have received private. (This can be done with a simple check-of-the-box in the channel settings.) That makes it tough to tell just how popular the channels that are up and running are.

But there are a few that do share this information, allowing us to get some insight into how much interest these premium channels are getting. Here’s one example, from a paid oil painting channel (which actually looks pretty cool): 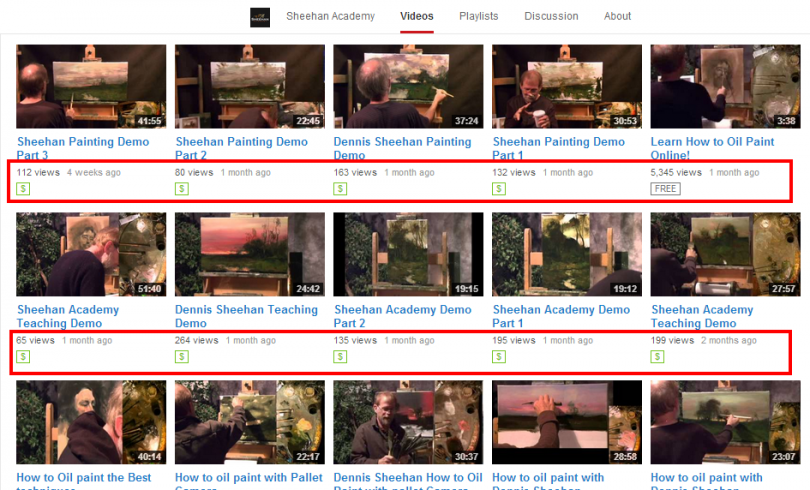 There’s definitely a “proof of concept” here in the sense that the numbers are greater than zero. But these premium videos aren’t exactly racking up thousands of pageviews as soon as they’re published.

There might be a couple hundred paid subscribers to this channel, which isn’t bad considering that a membership costs $20 a month. In other words, there’s money here but it’s not a huge amount. This paid channel might be making a few thousand dollars a month, but probably not more than that.

So there are positives and negatives here; it’s clearly possible to generate some incremental revenue from this channel, but making serious cash seems to still be pretty tough.

Reason #4: Content Creators Get Only a Portion of What Advertisers Pay

This huge discrepancy occurs for a couple reasons. First, YouTube takes 45% of the gross revenue generated, leaving 55% to the content creators. That “split” is fairly reasonable within the industry; most networks take half of the gross revenue in exchange for the services provided.

Second, ads don’t run on every video view. If you have monetization enabled on your YouTube channel, check out a few of your videos and take note of how frequently ads appear. Though spending on online advertisement (i.e., demand) is increasing, it hasn’t come close to catching up to the number of videos viewed online (i.e., the supply of “monetizable” videos).

In other words, the fill rate on YouTube ads is less than 100%. In some cases, it may be less than 50%. That means that from a monetization perspective, a significant amount of your views are going to waste.

Assuming a 45% cut for YouTube, here’s how different advertiser CPMs break down to the owner of the channel that created the content:

According to our analysis, the average CPM that can be expected from YouTube videos is between $0.50 and $5.00. That means that for every 1 million views of your videos, you can expect to make between $500 and $5,000.

A lot of the YouTube “stars” work very hard just to generate enough to scrape by. Olga Kay, who stars on five YouTube channels that have close to 1 million subscribers, estimates that she’s made between $100,000 and $130,000 in each of the past few years. That’s a nice living, but may seem modest given the success she’s had in building an audience.

In other words, there are some factors working in favor of YouTube content creators. Plenty of amateurs have succeeded in making YouTube their primary source of income, and even more have managed to generate a secondary stream of revenue from online video.

YouTube will write more checks to content creators than ever before, and the number and size of those checks will increase for the foreseeable future.

Getting rich from YouTube videos is a popular dream that is very rarely achieved. The extreme competition, low payouts, and often random chance associated with making a popular video means that the odds are stacked against anyone setting out to be the next big YouTube star.

But it’s definitely not impossible. The total revenue generated by YouTube partners is going to grow quite a bit in the next few years, and a chunk of that income will be claimed by amateur content creators who have interesting ideas an a determination to make their channel a success. If fame and mega fortune are not you aim but you would still like to monetize your YouTube channel, you should check out this course on Udemy: 10 Guaranteed Ways to Monetize Your Content on YouTube. Over 100 student have already enrolled on the course and seen amazing results.