CPC Arbitrage: What It Is and How to Pull It Off

The “Holy Grail” of display advertising is click arbitrage, the process of purchasing traffic to a particular Web page and subsequently making more in revenue than the initial inbound click cost. For example, suppose you’re able to buy a click (from various sources, which we’ll discuss that in more detail below) for $0.10 and make $0.11 in ad revenue every time someone visits that page. That’s not a huge margin, but if you’re able to buy millions of clicks you can start imagining a meaningful profit. In the early days on the Internet, click arbitrage was relatively common. As the number of players in the game has skyrocketed, markets have become more efficient and the “free lunch” has become more elusive. But it’s definitely still possible. Below, we’ll walk you through an attempt at CPC click arbitrage, and explain how one goes about trying to squeeze out a profit. (By the way, if you’re enjoying this article, you may want to subscribe to our free newsletter; we’ll send monetization tips straight to your inbox each day.)

The slow, hard way to get traffic to your site is to publish a lot of great content, establish a social media presence, and spend time marketing what you’ve created. You’ll eventually get some links to your site, start showing up in search engines, and have a recurring stream of visitors. The fast, easy way to get traffic is to buy it through advertising. There are a number of potential sources of paid traffic in 2014, including search engines, sponsored content networks such as Taboola and Outbrain, and social media platforms like Facebook and Twitter. Facebook has emerged as a source of cheap clicks as the company has ramped up its efforts to monetize both desktop and mobile traffic. John Loomer has some great insights into the costs of driving site traffic from Facebook. His research shows that CPMs tend to range from $1 to $4 for Promoted News Feed Posts. If you’re not familiar, these ads look like this: 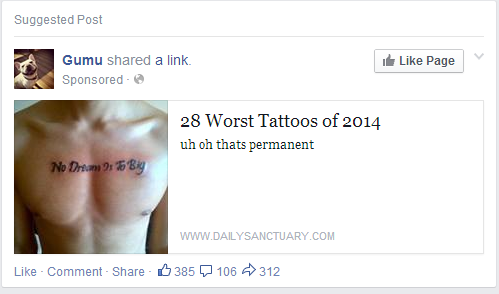 The click rates on these placements are all over the board, but by some accounts CTRs in the neighborhood of 2% to 4% are possible with good creative such as the image above. If you’re paying a $1 CPM, that gets you to effective CPCs of just a few pennies. We’re being pretty general with the cost calculations here, but the bottom line is that it’s possible (though challenging) to get clicks for as little as $0.03 to $0.05 on Facebook.

Once you get someone on your site, you need them to click as many ads as possible. Specifically, you need to make more than $0.03 from each visitor in order to turn a profit. AdSense limits its partners to three ad units per page, but there are easy ways to (legally) get many more ad units on a page. Specifically, using multiple ad networks in tandem and maxing out sponsored content centers can help create a a page that is dominated by ads. Here’s an example:

In case you lost track, here’s the running count on ad units on this page:

In total, there are more than 30 sponsored stories per page, along with some traditional banner ads sprinkled in. Counting each sponsored story as a separate ad, there are close to 40 different ads on this single page. It also appears that just about all the filters are turned off; many of the ads in the screenshot above include scantily clad women (and men). Those ads probably get great click rates, but most publishers will elect to turn those off in order to avoid avoid any risk to their reputation (for example, you won’t see Kim Kardashian’s cleavage on any of the Sponsored Content widgets on CNN.com or WSJ.com).

Also note that the page above is a “slideshow” where visitors need to scroll to a new page in order to see the next image in the countdown (in this case, bad tattoos). If someone scrolls through all 22 images, they could see more than 200 ad units (counting ten ad units on this page, as listed above). Even if they only make it halfway, they’ll see about 100 different ads. And if they Like or Tweet the article, there will be even more traffic that comes in as a result. When you’re showing 75 ads to a visitor you paid $0.03 to acquire, arbitrage suddenly seems possible. If the ten ad units have a combined RPM of $3.50 or higher, a profit is generated. With that many high impact ads on a page, including  many above-the-fold, that definitely is not an insurmountable hurdle.

This site probably gets dinged for being too “ad heavy” by the search engines, since the ad-to-content ratio is through the roof. But they probably don’t care; we’re guessing that most of the traffic comes through paid channels. That allows them to show a boatload of ads, and presumably make more from each visitor than they paid. The formula for CPC arbitrage is simple (though execution is tough): Cheap Clicks + High Pageviews per Visitor + Lots of Ads = Opportunity for CPC Arbitrage If you’ve had any success (or failures) attempting to pull this off, let us know over at the display ad forum.