MonetizePros has been reviewing the best ad networks since 2013 and we've built up quite the database. If you're looking to get the best CPM rates for your needs, check out our recommendation. Our readers also get a 10% earnings bonus for the first year!

Anyone monetizing a website through display ads wonders at some point how their earnings compare to their peers. Display ad earnings can be standardized through the CPM metric–or, more appropriately, revenue per thousand impressions (RPM). This figure refers to the cost to advertisers (which equates to revenue for publishers) for 1,000 ad impressions. In other words, it makes it possible to compare the earnings rates for sites regardless of audience sizes. The higher a site’s RPM, the more money it will earn for every thousand page views generated through ad networks (check out our media.net review). If you don’t have a site yet, click here.

Calculating an “average” CPM (or RPM) is of course very difficult. For starters, online advertisements are of course not served exclusively on desktop computers using Internet Explorer anymore; there are multiple mediums through which web traffic consumes content and ads. More specifically, a growing number of ads are served on mobile devices, within online videos, and within emails. Each of these channels has a number of unique characteristics that impacts the value of the ads to advertisers (and therefore the expected revenue to the publishers). We’ve compiled detailed information about average CPMs across various channels in our detailed CPM Rate Guide. A summary of this information is below:

In addition to the simple averages, each individual CPM rate guide contains:

Though ads are served in multiple environments, the most interest exists around traditional display ads. The following section takes an in-depth look at some data points for average RPMs here.

The revenue earned and RPMs generated will depend in large part on the demographics of the audience and the focus of the site. When it comes to display advertising, not all Web traffic is created equal. Some audiences are much more attractive to advertisers than others, and some verticals can command much higher rates. The more valuable the audience (i.e., the wealthier and more likely to be making a purchase), the more a site will make per visitor.

Even among similar sites, the earnings from traditional desktop display ads depend quite a bit on the site layout; the positioning and appearance of ad units can have a major impact on clicks and earnings. (See How to Place Banners: 11 Proven Layouts.) A poorly structured site in a valuable niche could very possibly make less than an optimized site in a less valuable vertical. All this to say: figuring out an “average CPM rate” is not as simple as it seems!

Despite the difficulty in computing averages and establishing benchmarks, there are several data points we’ve assembled that hopefully shed some light on what types of CPMs sites are generating in 2015:

One of the best tools for figuring out an average CPM is BuySellAds.com. Their interface is designed for buyers looking to place ads, but has some great information for publishers as well. You’re able to filter by channel to find sites generally comparable to yours, and see what they’re charging (and, in many cases, receiving). Here’s an example from their Entertainment channel: 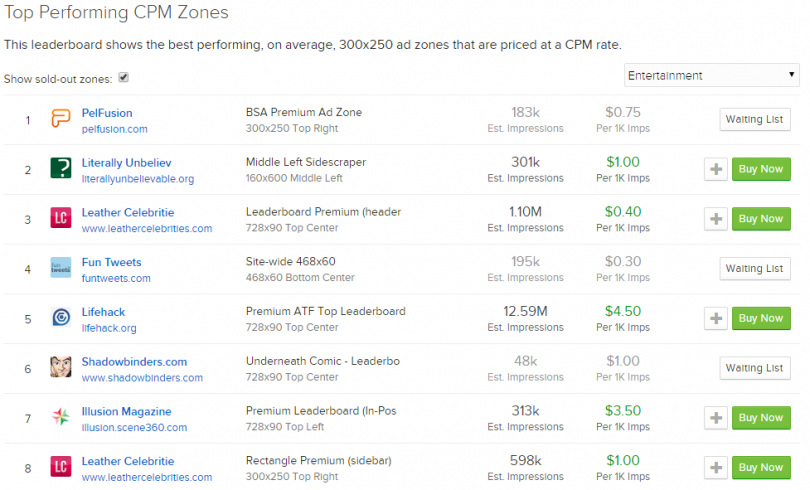 Not surprisingly, there’s a pretty wide range in the CPMs that different publishers are earning here. But the data from this tool helps to give some timely and targeted real-world data on CPMs. We analyzed the public data on this site to add some more detail to the average CPMs being seen in the market now. Below is a summary of the top performing ad units for several different verticals. For each, we took the top ten sites listed under the “best performing” screen described as “top” (i.e., appearing at the top of the page). Note that these rates reflect the gross amount charged to the advertiser, and are for a single above-the-fold ad unit:

Based on our experience, the ad network Media.net gets publishers the highest average CPM rates – click here to read our review.

While this data is extremely useful, there are a few points to note:

Another data point (from a small sample size) comes from Hochman Consultants. They’ve tracked advertising costs for their clients over the past several years:
Again, this data contains a fair amount of volatility. But the general range of CPMs is fairly consistent with the other data points highlighted above. 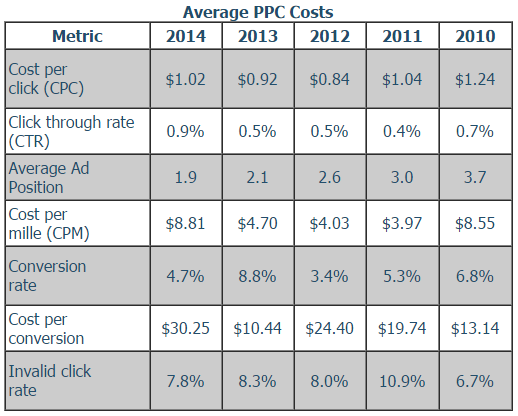 While a 2015 article by Wordstream puts the average CPC (in Google AdWords) between $1-2.

In other cases, there may be a meaningful difference between the CPM and an RPM. This occurs for two primary reasons:

To use our example above, let’s assume that the advertiser spends the $1,000 to get 100,000 ad impressions–their RPM remains constant at $10. The publisher, however, serves a total of 200,000 pageviews. Half of those show the ad, while half are blank because no ad was sold. (I.e., supply was greater than demand; in reality, this is a pretty rare occurrence given the sophistication of ad networks.) Further, the publisher used an ad network that takes 50% of gross spend. The result is $500 in revenue to the publisher for 200,000 pageviews, or an effective RPM of just $2.50. This is obviously quite a bit less than the advertiser CPM of $10.

Determining an average CPM for benchmarking your site is a very tough process. The rates earned can vary significantly by vertical, and even among sites with different layouts. For improving the earnings of individual sites, the following MonetizePros articles may be useful:

If you’re looking for ways to maximize revenue through direct sales, these might provide some value:

And lastly, if you’d like to see further information on average CPM rates (including by channel, i.e. Google CPM), don’t forget to check out the MonetizePros CPM Rate Guide.