When it comes to traffic monetization, the most successful sites are those that employ a variety of traditional methods as well as some techniques that aren’t “mainstream” at all. While large “high quality” sites tend to stick to the standard, plain vanilla monetization methods, there are more and more examples of top tier websites getting a bit more creative in their efforts to turn pageviews into revenue.

Below are seven examples of creative monetization in action at some of the largest websites in the world.

Travel comparison site Orbitz has embraced co-registration as a way to make some incremental revenue. This process involves allowing users to opt-in to a third party product, which is typically a newsletter or email list. (In the example below, visitors have the option to sign up for a Texas travel guide.) Whenever someone opts in, Orbitz will pass that contact information to their partner and receive payment in return. 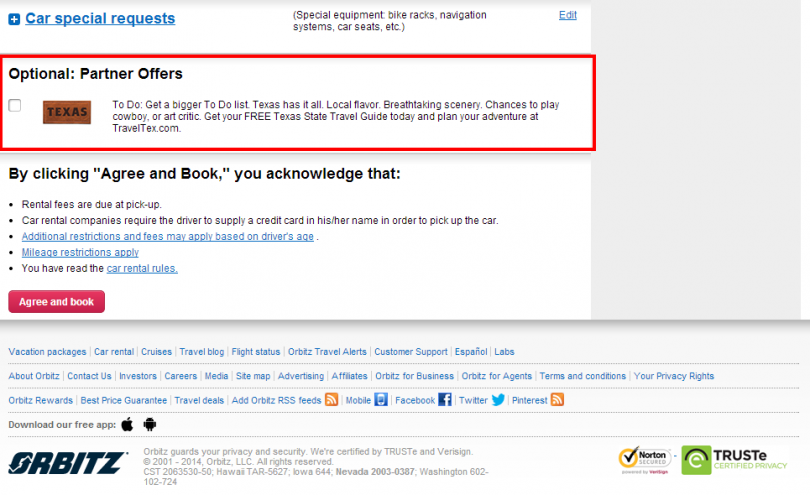 Technique #2: Sponsored Tweets by The Onion

While the vast majority of tweets sent out don’t generate any direct revenue, a few publishers and accounts have embraced sponsored tweets as a way to make a bit of money. The Onion does this somewhat regularly, usually as part of a larger sponsorship that includes a dedicated section of its website. (Yes, this is a real ad campaign.) 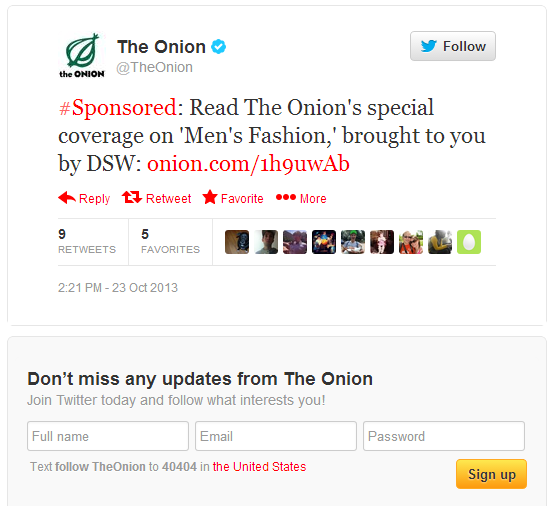 The Onion isn’t the only big time Twitter account willing to put out sponsored tweets. For a mere $4,600 you can get Paris Hilton to tweet to her 12 million followers. (Also see our feature on 101 Ways to Make Money on Twitter.)

Sponsored content links, the practice of dedicating sections of a site to highlight content from other properties, has become an increasingly popular way for publishers to gain some incremental revenue. In fact, most major publishers now have sponsored content sections of some kind, leading to headlines like “Miley Cyrus’ Shocking Shower Selfie” and “30 Hottest Jewish Women Under 40” on sports super-site ESPN.com: 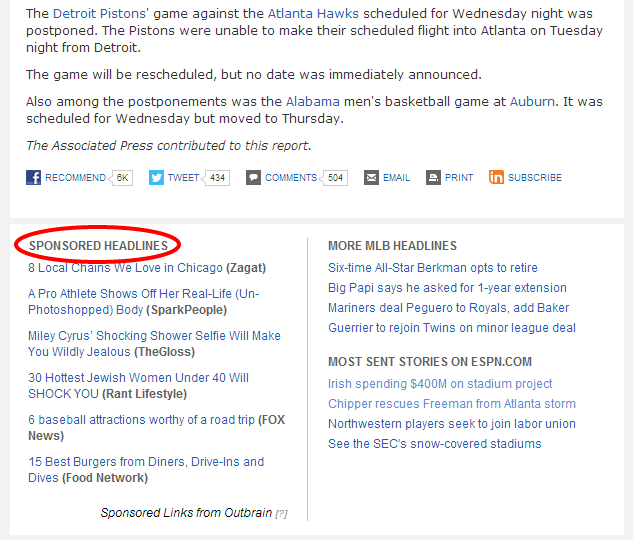 CAPTCHA technology is nothing new as a tool to prevent bots from creating memberships and clogging up your site. But the concept of sponsored CAPTCHA, which incorporates ads into the process, is a novel idea. A growing number of properties are implementing this feature, which we think both improves the signup process and generates a bit of revenue in the process: 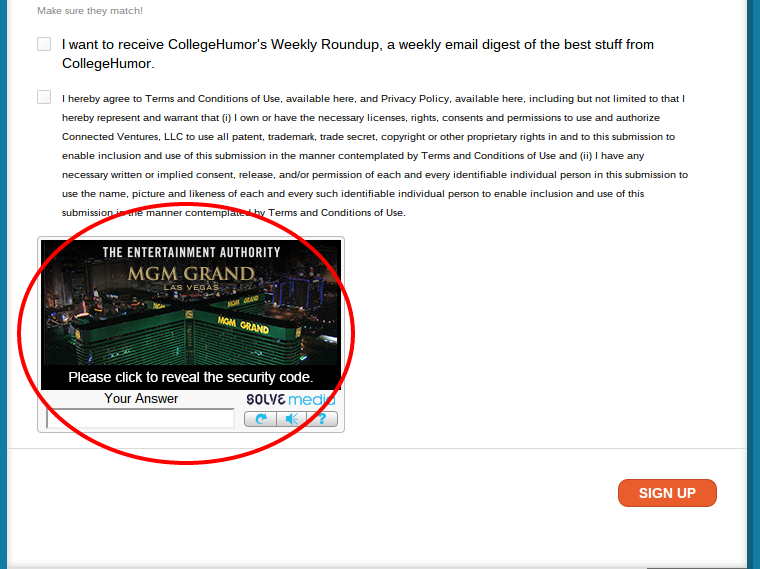 This example is perhaps not the sexiest example of creative advertising, but interesting nevertheless. Below is the footer of Weather.com (owned by The Weather Channel). In addition to the normal navigation links are several links to partners, including sponsors within the site as well as to third party properties such as WebMD, Go Daddy, and Georgia Tourism:

Movie review site Rotten Tomatoes uses a very high impact, disruptive ad unit on some of its visitors. This interstitial ad pops up in front of the content to play what is essentially a 30-second TV ad (in the screenshot below, a PlayStation 4 commercial). This ad unit seems to appear after a visitor has viewed a few pages as opposed to displaying on the first contact with the site, a common tactic to avoid scaring off first-time visitors too quickly. 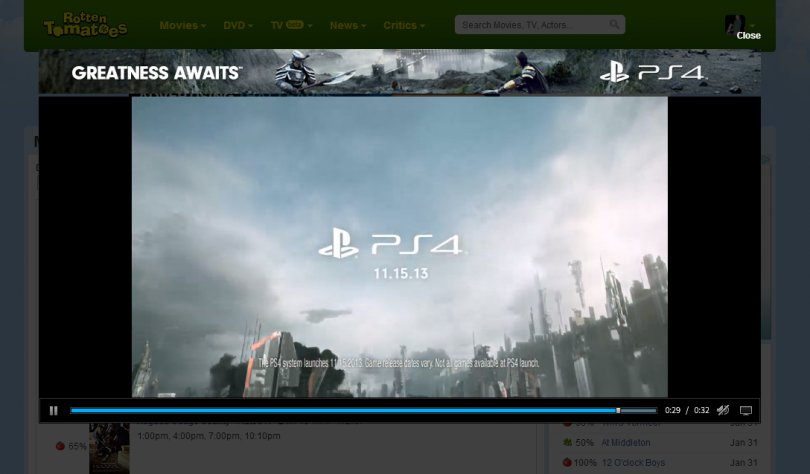 Below is a screenshot from an article written by Martha Burk and published on HuffingtonPost.com. At the conclusion of the article is a fairly large section dedicated to highlighting a couple books that Ms. Burk has written. If you’re interested in picking either of them up, there’s a handy link that will direct you to Amazon to place your order.

Through these Amazon Associates affiliate links, HuffPo earns a commission for each sale of these books (and likely any other products) that it refers to Amazon: 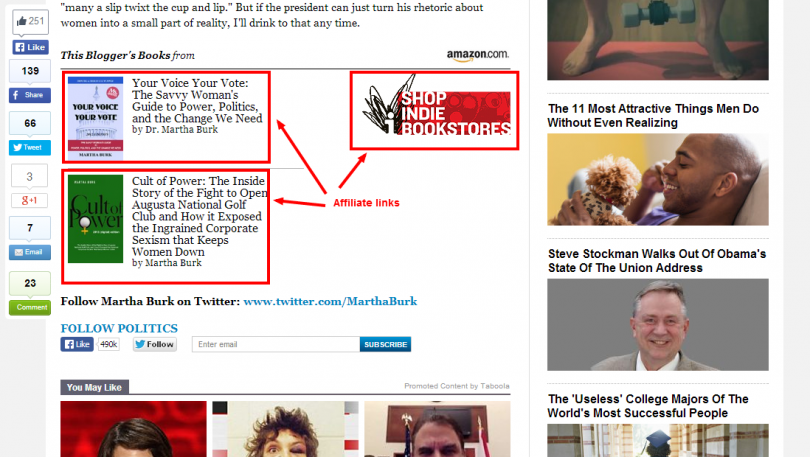 If you’re interested in monetizing your existing base of Web traffic more efficiently, your monetization hat should always be on. There’s no need to reinvent the wheel; instead, pay attention to what other sites, both large and small, are doing in order to generate revenue from their pageviews. Previous Post What Are Average CPM Rates in 2018? Next Post 17 Articles to Read Before You Start Affiliate Marketing